Loki was thrown from a moving vehicle

He then lived alone in the wild for a month, before being rescued, in a semi-feral state.

We shared an update from his adopters a while ago, and we wanted to repost that here in case you're not on our email list, because it's a heartwarming update. 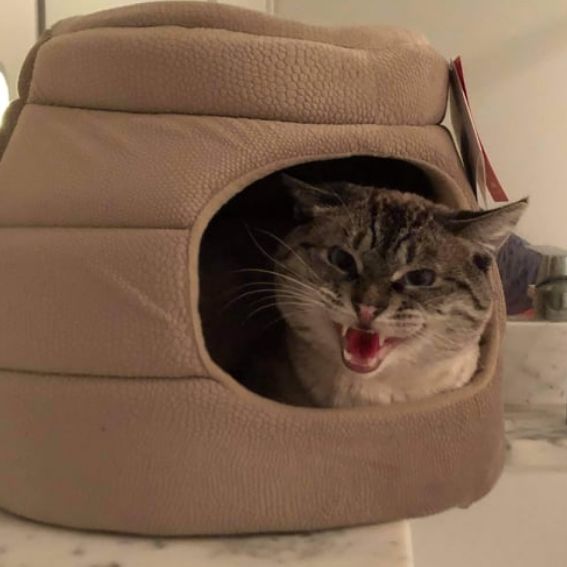 "We adopted Loki (originally called Willy) sight unseen after reading his bio and being moved by its description of a shy boy who, even at his young age, had already endured some very hard times.

At barely two years old, he was thrown from a moving vehicle and lived on his own in the wild for a month before being rescued.
While he was described as semi-feral, we were hopeful that we could acclimate him to domestic life and human affection.

When we first met Loki to bring him home however, we did briefly question what we'd gotten ourselves into. At the time, he was being kept in quarantine while recovering from a kitty cold, and seemed wholly disinterested in leaving his quarters, swatting away any attempts to extricate him with an indignant hiss.
Upon arriving in his new home, we kept Loki in our ensuite bathroom (updated to serve as a bachelor cat apartment) and did our best to give him space and time while he got used to unfamiliar sights and smells and continued to recuperate from his illness.

Given his past traumas, he was justifiably skeptical of human intrusion, and would usually hide, hiss, or both whenever we would enter the room. 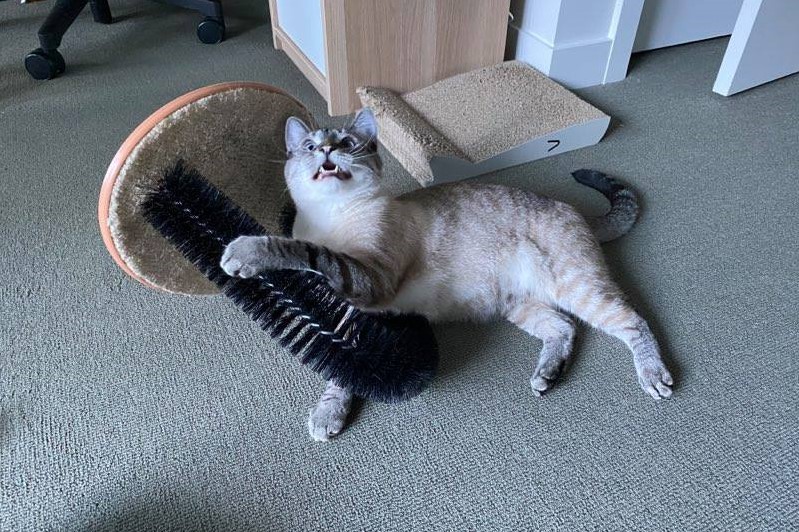 Over the course of several weeks, he began to slowly lower his guard, as his health improved, and as we spent more time in his room, reading, talking, and eventually playing with him.
As we played with him more, we realized just how energetic and strong he was, taking an arm off his Pidan Yeti friend one day, shredding a ribbon toy the next. 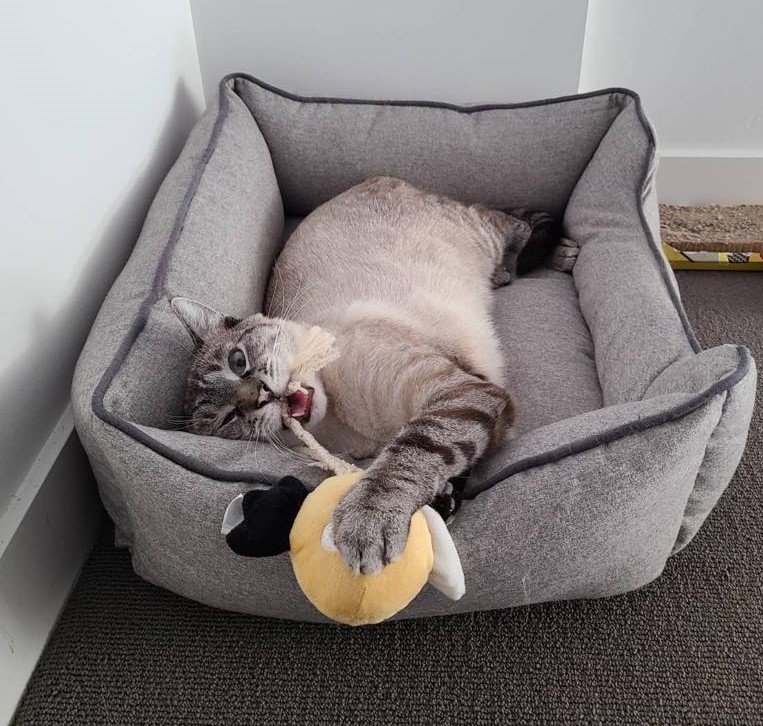 We knew that he needed more space to expend his energy, and with a newly clean bill of health, it was time to explore, and perhaps more importantly - it was time to meet Livy.
While we originally thought that Livy would enjoy some feline company, this didn't turn out to be the case (at least at first).

As a senior lady accustomed to being queen of the household, Livy was initially and vocally resistant to relinquishing any part of her domain to an interloper.

Similar to Loki's initial reluctance to trust us, Livy was skeptical of his intentions, and would often ward him away with a growl, hiss, or a swat, or would retreat to one of her cat towers to better defend its perimeters with a mighty swipe.
However, throughout it all, Loki was undeterred, and would consistently make an effort to say a friendly hello with a gentle nose boop or a high-pitched mew, seemingly incongruous with his large frame.

Regardless of any hostility he received from Livy, he was clearly smitten, and would become her shadow throughout our home; his confidence swelled tremendously whenever in her presence and no matter how grouchy she could be, he was always happy to be in the presence of a new feline friend. 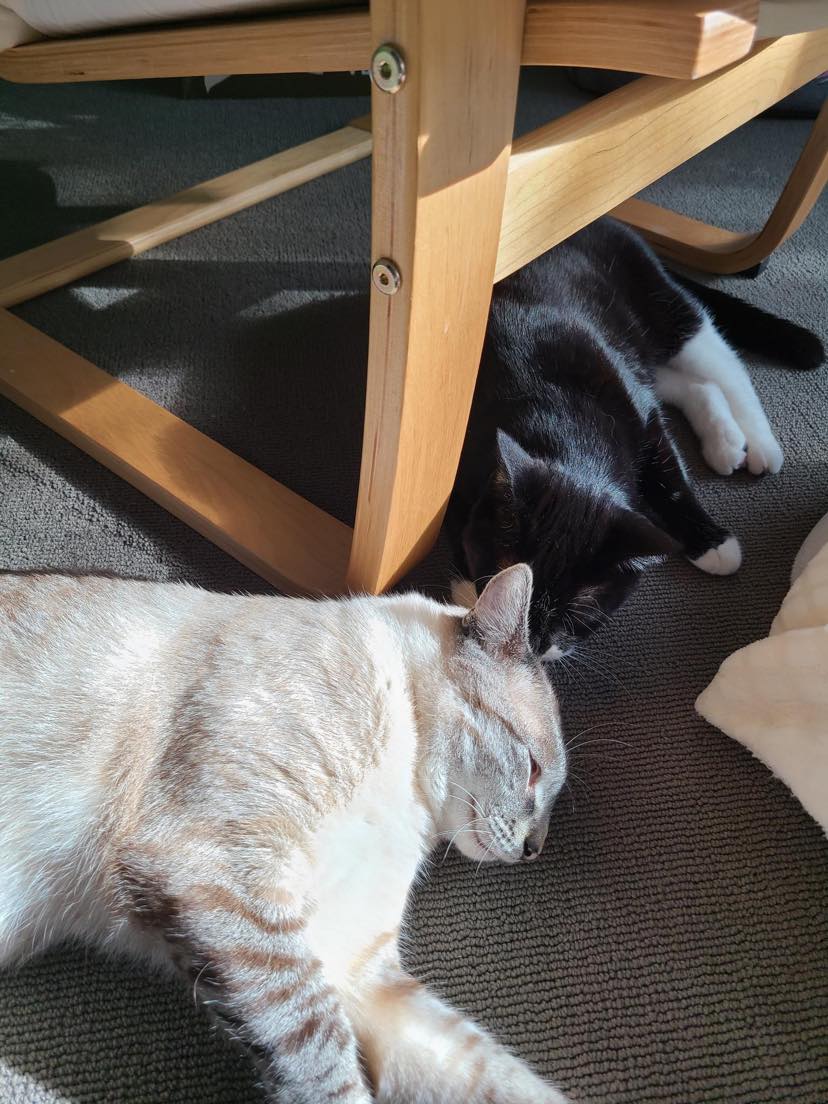 After spending time as Livy's understudy and seeing how we interacted with her (and vice versa), it finally seemed to click that this was a safe space, and that we were here to take the best care of them possible.

From a starting point of spit-hissing and recoiling whenever we entered his bachelor pad, he: 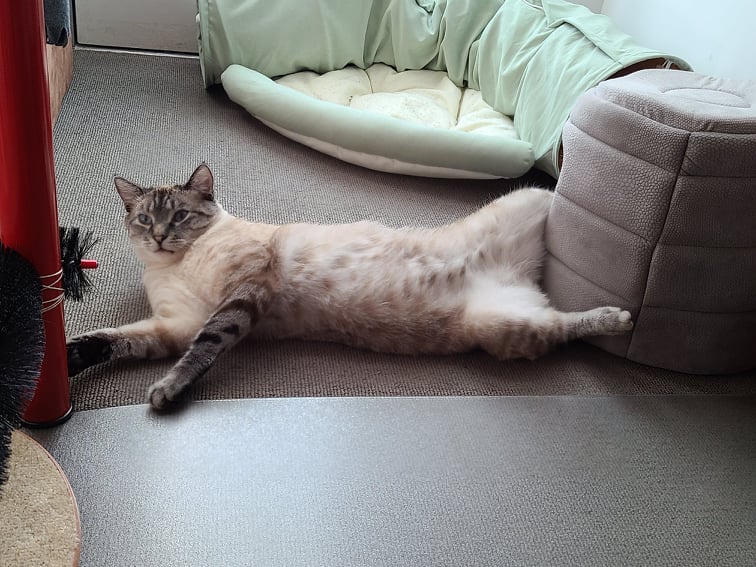 With every milestone, the trust between us deepened, and he has become more and more confident in his forever home.

His constant optimism and positivity eventually wore down even Livy's gruff facade.

While he can still get on her nerves the way only a little brother can, they have gotten so much better about sharing their space as they play, sunbathe, and watch out the windows for any wild prey together (Loki is partial to birds and surveils the sky while Livy keeps an eye on the ground for any errant mice). 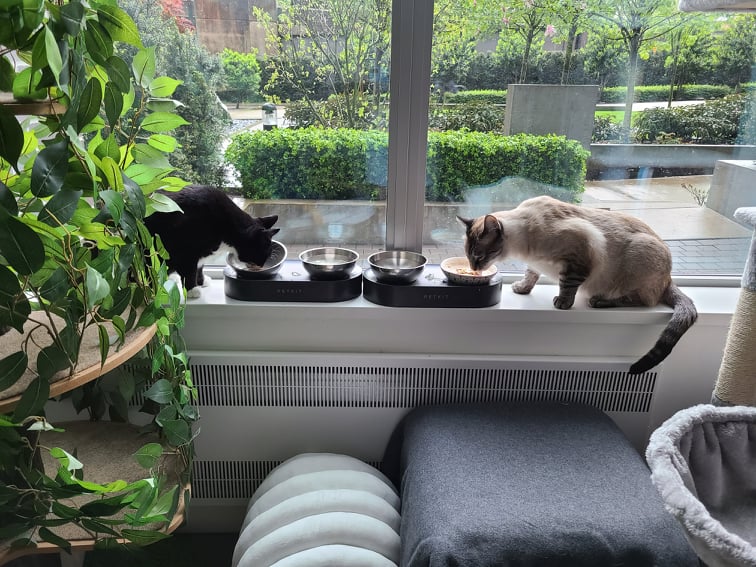 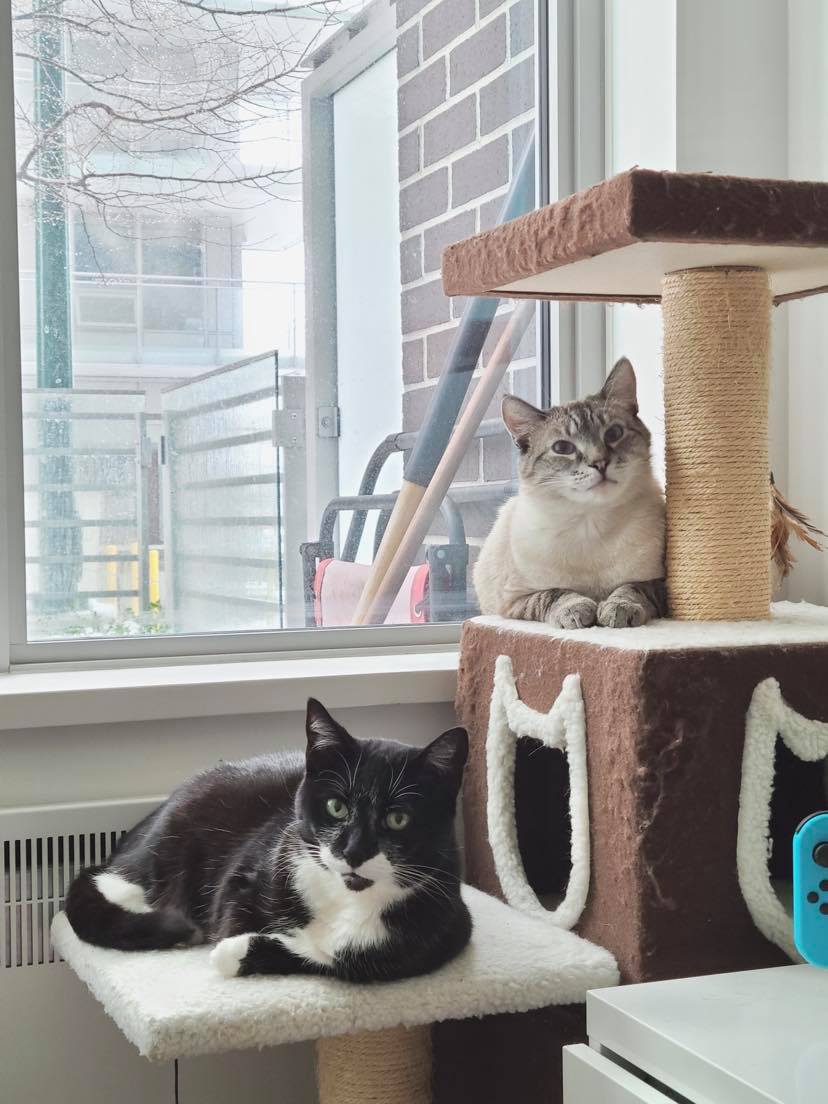 While the path to this point has not always been easy, we're so glad we didn't give up on him when the going got tough, and so grateful to have had the opportunity to give Loki the love and the life that he deserves.

We can't thank Catoro and CTRS enough for helping to bring him into our lives!"

We hope you enjoyed this adoption update, it really shows the importance of patience and understanding when you adopt a cat. Even cats who start off feral or semi-feral can improve in the right situation. It might be more work but as you can see in this story and in the photos, it can be so rewarding!

If you're looking to adopt, keep an eye on our available cats page and before you apply to adopt make sure to book a visit to meet them.

Also, if you have adopted from us, we would love to hear how your new cat is doing since arriving home. Send us an email with an adoption update if you want!

Are ALL Catoro cats available for adoption?

Staff interview with Hayley on working at Catoro

How to care for your cat's teeth

These rescue cats found homes in 2022